Aromaleigh is well known among the make-up aficionado crowd as a creator of beautiful mineral makeup. Personally, I have never tried Aromaleigh’s makeup, but if you scan the reviews over at MUA you’ll find rave reviews for the majority of their products. I have however, had the opportunity to experience two of their all-natural fragrances thanks to a lovely friend who so generously sent me samples to try.

It feels quite serendipitous that I decided to open up my sample vials this past week after having them for a couple months now, as both Madeleine and Dulcinea capture aspects of the holiday season. I had not read the notes of either perfume before applying them on my skin, so I had no preconceived notions about coziness, warmth, or holiday gatherings. Yet while wearing the scents on each wrist, Vince Guaraldi’s “A Charlie Brown Christmas” was humming through my mind.

Of the two, Madeleine is the most holiday-ish. Mulled spices, with nutmeg at the helm, opened the fragrance and a citrusy mix of lime and pink grapefruit imparted a zesty lift so as to not let the spices become too excessive. The topnotes ushered in a festive, sparkly mood, and since lime is the key citrus player rather than pink graperfruit, it was vibrant without being too sweet or cloying. Once the fruity part of Madeleine dissipated, the soft warmth of benzoin and shades of cocoa were allowed to emerge. Nutmeg remained, so they all mingled in a cocoa-vanilla-spice filled aroma that was just downright pretty.

The drydown afforded a smidge of woods, sandalwood, as is listed on the website. The woodiness was so subtle to my nose that it did not read as sandalwood, or any wood in particular. The suggestive tone was quite nice though, and I enjoyed how it too melded with the creamy and spicy coziness of Madeleine. 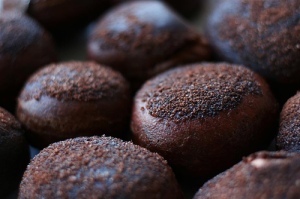 Cocoa is like a velvety backdrop in Madeleine, but in Dulcinea, it’s a major player. Blood orange and cocoa mixed to create a liqueur vibe; simultaneously sensual and convivial. Tonka bean and vanilla edged out the blood orange soon enough and became a warm and comforting trio with cocoa guiding Duclinea’s evolution. Tonka’s almondy accents and cocoa’s richness satisfied my gourmand hankering that rears it head this time of year. I’ll be on the look-out for others as well, but Dulcinea will certainly sate that desire for now.

Madeliene and Dulcinea are $50 for 1oz. (Madeliene is on sale for $37.50 until 10am EST 12/9/09) and are available at Aromaleigh.com. Sample packs of all six Aromaleigh fragrances are available for $14.

Photo of Hannukah Doughnuts by gkamin at Flickr.com